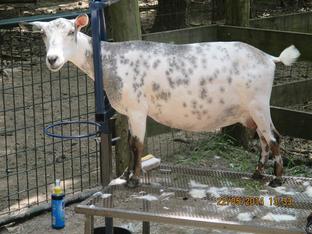 This is Spicy. She is hands down.. one of the nicest goats here. She freshened December 25, 2013 with triplets - two does and a buck. She has a nice soft udder with large orafices. She has a great personality and is turning out to be an outstanding doe.  Her daughter Creekwood Acres Margot (owned by Gray Stables) took Reserve Junior Grand Champion at the 2014 Cibolo Classic.

2015 - Spicy freshened in early January with triplets again... 2 bucks and a doe. She also received a final score of 91 on her LA this year!!!!! The appraiser just loved her!! Her daughter, Creekwood Acres Sriracha,  took first place in a big class of juniors!

2016 - Spicy had quads this year! (2B/2D)
~Spicy won Reserve Grand Champion in the Youth and Open Show at the Houston Livestock Show.
~ Spicy won Grand Champion at Memorial Day Goat Show in Brenham TX!!!!
~Spicy made the AGS Top Ten list last year - she was #3 in high production milking 6.1lbs and she was #9 in high overall score with 73.43 points!!!! This doe has it all! Beautiful conformation and a real will to milk!
​
Spicy is dual registered AGS/ ADGA. 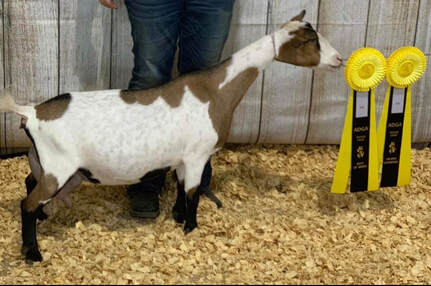